In this Digital Nomad Philippines Guide, we go through the reasons why Makati is the best city in the Philippines for long-term travelers.

People who visit the Philippines for its pristine beaches and islands often avoid its capital, Manila, for various reasons due to safety, congestion and cost, but these generalisations come without fully understanding the geography of the capital of the Philippines.

There are areas in Metro Manila that are well developed and suitable for digital nomads, such as Bonifacio Global City, Ortigas, or Makati. The latter is the one we know best as it’s where we were based for more than a year. Makati has a Singapore-looking Central Business District with high condominium towers, world class restaurants, a renowned nightlife and shiny shopping malls. This Digital Nomad Philippines Guide will provide reasons and free maps that digital nomads in Makati can use for coworking, eating out, and partying.

Digital Nomads in Makati will never get bored

Makati is a city that is very alive. No matter what time of the day, you can always find something happening in this town. It has small affordable restaurants, international cuisine, and a mix of cultures. The city also has a thriving party scene.

Poblacion is the best known neighborhood for going out. It is a mix of high end rooftop bars but also cheap drinks and great live music if you know where to look. There are many places we can recommend in the area. Don Pedro Street is a busy party arteria in Poblacion, but bars are to be found everywhere in the neighborhood.

We’ve narrowed them down for you in this Digital Nomad Philippines Guide:

Beyond Poblacion, there are other nice spots such as Belle and Dragon (Greenbelt) (also where they have the famous Quiz Night), Black Market (San Lorenzo) and 20:20 (San Lorenzo).

Digital Nomads in the Philippines will not have language barriers

Almost everyone in the Philippines speaks English. It is actually one of the country’s official languages. All signs are in English and people generally speak the language very well. Meeting new people and doing things on your own has never been easier in Asia.

People also speak Tagalog (the other official language in the Philippines) aside from English. Other dialects are spoken all over the 7,000 islands of the archipelago.

In addition to speaking multiple languages, Filipinos are very hospitable. The language barrier can be really strong in countries like Japan, China or Vietnam for instance, which makes it difficult to befriend locals.

The Philippines seems to solve this issue. It makes it a lot more easier for digital nomads in Manila, Makati or the country as a whole, who don’t speak the language and can’t invest time in learning it, especially when their stay is temporary.

That being said, it’s always nice to learn a few words of Tagalog, such as “Salamat” (thank you), “Kuya/Ate” (Brother/sister when respectively addressing to someone) and “Kamusta” (How are you?). 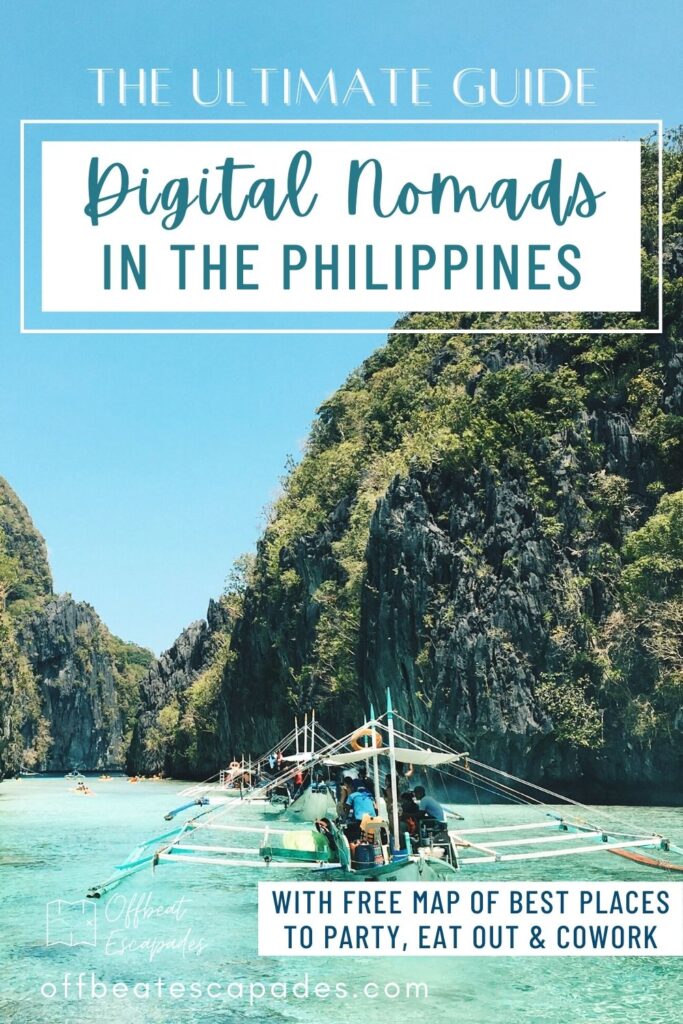 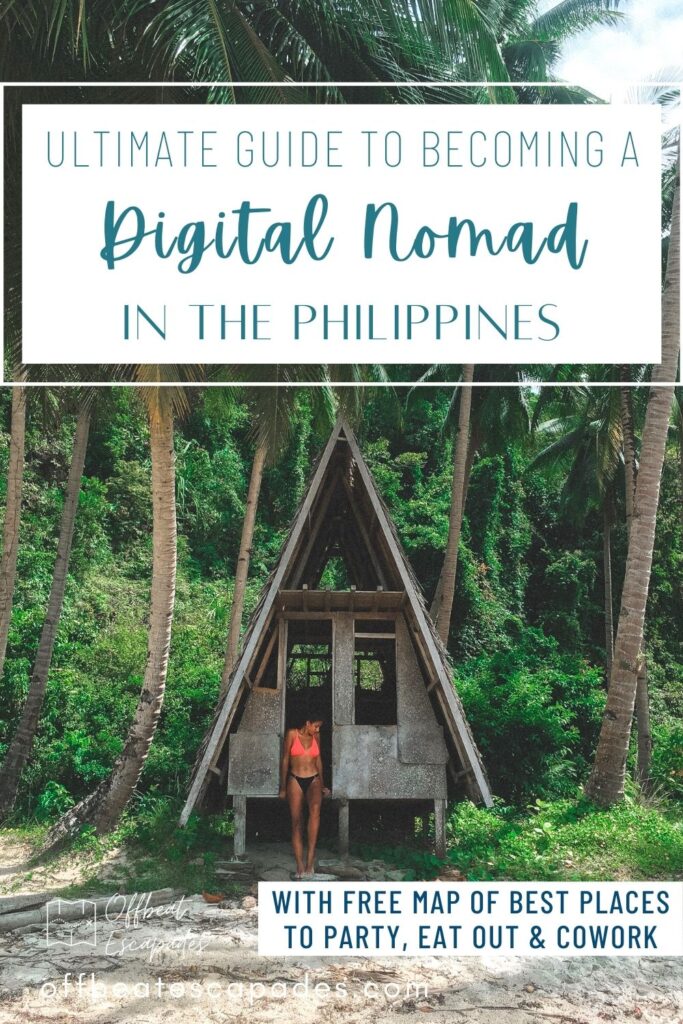 Overall Low Cost of Eating Out in Manila

The cost of eating out is still low, even though it can be cheaper in other places in Southeast Asia. You can get meals for 2 dollars or less. we’d highly suggest getting Filipino food whenever you can, as fast food and international cuisine can be either unhealthy or a bit more expensive.

Another tip to eat affordable are the food courts of shopping malls, where you can get meals for 100-150 php (Philippine Peso), which is about 2 to 3 dollars.

Here are some of our top picks for affordable restaurants:

Many Cafés and Coworking Spaces for Digital Nomads in Makati

While Makati isn’t at the level of Bangkok or Saigon when it comes to remote work culture, it is still possible to find places to get some work done. From a simple café with wifi to coworking spaces, you’ll find a places that fit your needs if you like to work in a social environment.

It’s important to note that you’ll find a lot of chain cafés (Starbucks, Seattle’s Best, Krispy Kreme to name a few), but that not all of them are suitable to work at, as their wifi can be spotty.

In this Digital Nomad Philippines Guide, our best picks in Makati (with reliable internet and good atmosphere) include:

In addition to providing a 30 days visa on arrival for most countries, there is a possibility to extend it at the local immigration office in Makati, which is very convenient if you want to stay here for more than a month without having to fly somewhere and back. With one of us being Belgian, we would simply visit the Makati Extension Office and extend our stay every 30 days.

The cost of a 1 month tourist visa extension is about PHP 3,200  (about 45 EUR or 50 dollars). While it isn’t cheap, it’s definitely more affordable than planning a trip to go on a visa run outside of the Philippines.

You’ll find more information on the Official Immigration Office Website and below is the location of the Makati Extension Office.

Digital Nomad Philippines: A Look into the Disadvantages

Despite the perks listed above, Makati is (far) behind on certain points

While it is an attractive city in the ways listed above, Makati and Metro Manila also come with some disadvantages people should be aware of:

Conclusion: Makati is the best pick for Digital Nomads in the Philippines

Far from being a digital nomad hub, Makati is still the best city for digital nomads in the Philippines, thanks to its amenities, food scene, friendly people and interesting nightlife.

While the internet and traffic situation cannot be ignored, it’s just something to be aware of before you come. After all, travelling is about getting out of your comfort zone.

We would also recommend Makati to those who plan to visit different islands of the Philippines and still want to keep a base.

Have you ever visited Makati or Metro Manila during your stay in the Philippines? If you have questions or stories related to this Digital Nomad Philippines Guide, we’d love to hear from you in the comments below!

LIKED OUR DIGITAL NOMAD PHILIPPINES GUIDE? PIN IT FOR LATER! 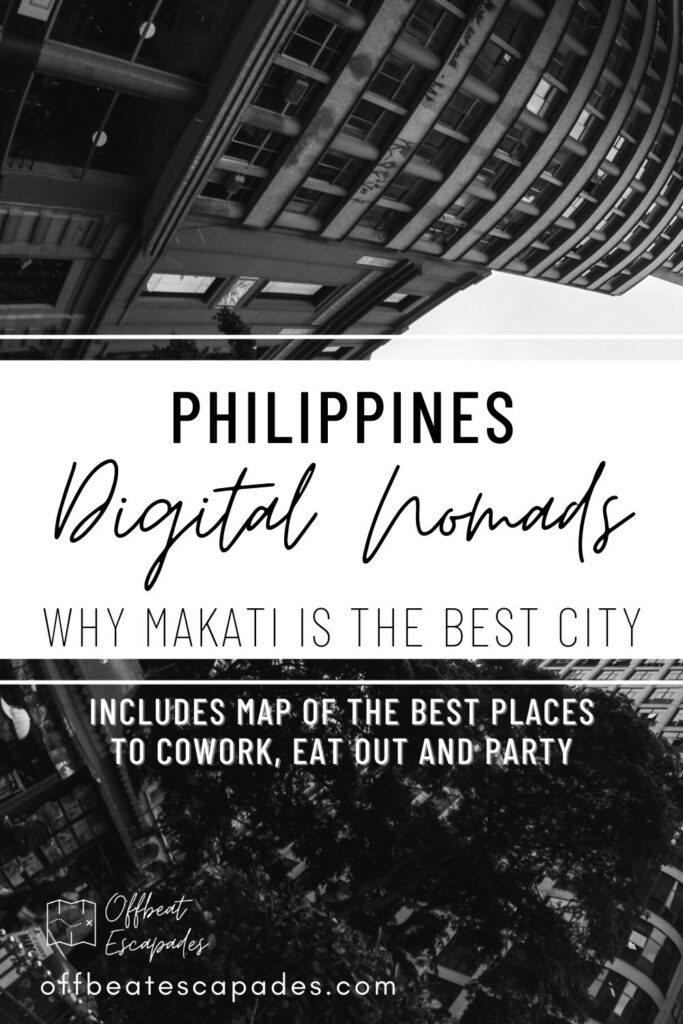